How to plan a trip to Spiti - complete guide. The Spiti Valley has always been under the veil of mystery, no matter how much you read about it or silly your mind going through reels, the place doesn’t reveal its resplendent self unless you set a foot in its land. Lauhal and Spiti Valley are peculiar in their ways, whether it be a cultural fusion of Buddhism and Hinduism or preserving Tibetian heritage, you will be amazed by the stories and history this place hides beneath its beautiful terrain. Spiti has gained the love and wanderlust of travelers all over the country. You will see people rushing towards the valley throughout the year, but only a few can plan a successful trip to Spiti given the good accommodation, comfortable transportation, and fun trip on a reasonable budget. So, if you are in for planning a to Spiti, go through the article and get started.

What is the best time to visit Spiti Valley?

The most asked question by travelers is what is the best time to visit Spiti, even though the roadways to Spiti remain open throughout the year, you will witness stretches of the place camouflaged into the ongoing weather – white snow land in winters, colors in September autumn and so on.

This is the coldest time of the year in Spiti, the temperature even goes down to -20 Celsius during this time around. This is the best time to go if you want to witness snowfall. Difficulties like – lack of water facilities, accommodation, road blockages, and the possibility of delays in plans are prevalent during this time around, thus plan to winter Spiti Valley, only if you are okay dealing with such problems. The Manali – Kaza roadway is closed in these months so you won’t be able to complete Shimla – Spiti – Manali circuit. Spiti in march can be benchmarked as a slow transition from winters to warmth.

Spiti in April – May

Summer gives a gentle knock in the valley in April and May, roads start to open up as the snow melts down, the tourist count is low, and roads down to Manali begin to open up (not completely though, the Manali – Spiti opens up fully only during June but this year it opened up in May), so you will be able to visit Kunzum Pass and get your clothes wet in snow. The accommodations also open up.

This is season time in the valley, as even the road to villages like Hikkim, Langza, Demul opens up and you can plan a visit there. You will meet a rush of travelers but on the brighter side, all the accommodations and activities operate fully in these months. Manali – Kaza roadway opens in June and you can also visit Chandratal lake. This is a good time to visit, but be cautious of water streams, gushing down the roads as snow melts. It is advisable to begin your journey in the early morning.

Monsoon seasons begin during august, having witnessed the massive landslides in Kinnaur during august, you should take the Manali route during august (though road conditions are not good at this route either). Spiti does not have anything more than a little drizzling but roadways connecting it, i.e Shimla, Kinnaur, and Manali experience heavy rainfall. So this might not be the ideal time to visit, but even if you do please be cautious.

Spiti in September and early October

The shadow of dark clouds passes out and gives away light to the ripening autumn. This is the most colorful time in Spiti, the weather is bearable and the season of Spiti apples is in full speed. The Kunzum pass has a chance to receive snowfall in late September and mid-October too, so avoid this route for traveling during October.

Spiti in November and December

Spiti in winter is no less than a wonderland. The snow covers the valley and illusions the eyes into believing as if you are in a snow globe, many adventurers plan their trip during this time just to witness snow, even though facilities like water and electricity are luxury during this time, you will also have to be mentally and physically prepared, but at the end, it will be worth it.

To conclude, May to September is a good time to visit Spiti in the summertime, and in wintertime early November and December are ideal. 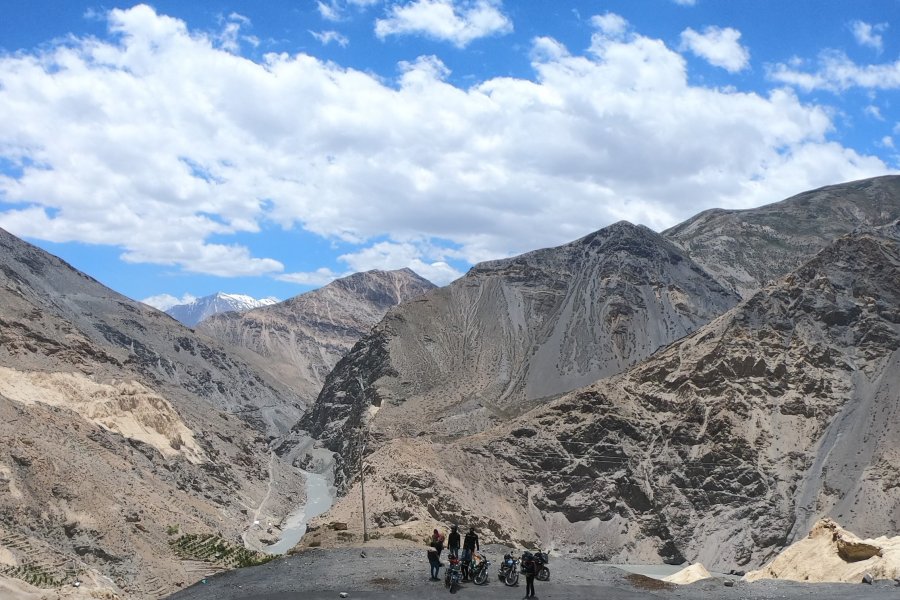 Roadmap of Spiti Valley via Manali/Shimla –

There are two ways to reach Spiti Valley – Shimla or Manali. Usually, the Shimla route is the one taken by most travelers because it covers the Hindustan – Tibet Highway, the most treacherous highway, which will push you to the edge of your seat, and also the possibility of AMS (Acute mountain sickness) decreases. Following are the details –

a) Shimla to Spiti Valley

Shimla to Kaza roadway is 414 Km long, so with one night stay in Kalpa and Tabo (for exploration and acclimatization), you will reach Kaza (in Spiti) by the 4th day in the noontime. You can add or subtract the places to visit on the Shimla – Kaza roadway, but it is recommended to cover them all if possible.

Day 2: Sangla – Chitkul – Kalpa ( 30. km local area) On the second day, you can either stay back and explore the wonders of the valley like Kinnaur point, the banks of the Baspa river, the famous apple orchids, and so on, or you can directly head towards Tabo/Kaza.

Day 3: Kalpa – Nako – Gyu – Tabo ( 161.2 Km) The third day began your journey from Kalpa, covering Nako lake and Tabo monastery on the way you will reach Tabo in 8-9 hours. It’s advised that you take a night’s stay here.

b) Manali to Spiti Valley

Manali to Spiti Roadway is not that popular among travelers due to its rough roads and fewer sightseeing places on the way. Even though the distance between Manali and Spiti is only 177 Km but it takes 7 to 8 hours to reach as the road conditions are not that great.

Even though it is only a one-day trip from Manali to Kaza, but chances of AMS increase as your body is not acclimatized to the high altitude of Kaza ( 3,800 m). So you can plan a night’s stay at Keylong or Solang valley to get acclimatized first.

There are three modes of transportation to Spiti –

Is Spiti safe to visit?

If you talk about roadways then yes they are dangerous and challenging and if you have zero driving experience in mountains you will have to hire a skilled driver, as driving yourself is a risk that you probably wouldn’t want to take. Other than that the locality of Spiti is peaceful and the people to are friendly. Other than that everything depends on your conduct if you travel mindfully everything will be in your favor. Be a good traveler and always be aware of your belongings and location.

With global warming swarming on the head and fast-melting Glaciers, places like Spiti have been the primal target of climate change, as it doesn’t rain much in Spiti (being in the terrain of cold desserts) snowfall is the major source of water for the area, but since past few years, the inadequate snowfall has pushed the area on the brink of water crises. Whether it be farmers or Locals, they are suffering the consequences of water scarcity to many degrees. With increasing Spiti valley tourism, pressure on limited water sources is more than ever, so we request each individual to keep this fact in mind and try to save water as much as possible. From using Indian – toilets to being humble and patient toward the service providers your actions will be a return gift to this beautiful place. Be loving and kind towards the earth you walk upon.

The  Weather in Spiti remains cold and harsh the majority of the time, in summers the temperature goes maximum to 29 degrees, no more than that. So the best time to visit Spiti is from May to September (ruling out July and August due to heavy monsoons). Spiti’s temperature hovers around minus in winters, it can go to -5, or lower, here is the detail of weather and temperature in Spiti.

Places to visit in Spiti Valley?

Important Tips to plan a successful trip to Spiti-

1. Pack warm clothes, as Spiti remains cold throughout the year.

2. Keep a check on Acute Mountain Sickness (AMS), while you travel from lower areas to higher areas

4. Do not carry disposable water bottles, have an eco-friendly trip.

5. Check the weather of the days you are planning to go to, and avoid going in the rainy season, (especially through the Kinnaur route).

6. Carry your Id proofs and other documents with you all the time.

7. Do not exert yourself, if you don’t feel well take a rest for the day. 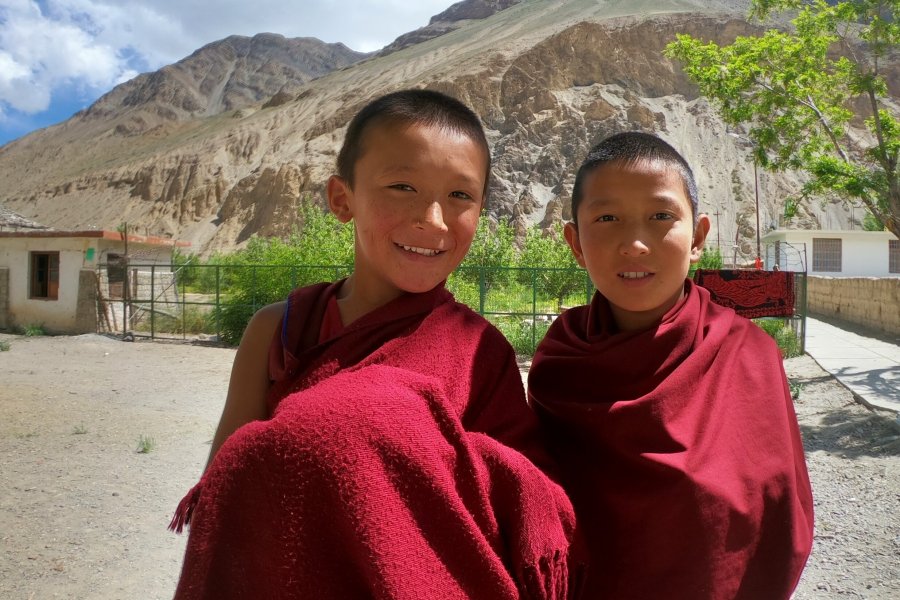 1. Is Spiti worth visiting?

Yes, definitely yes, Spiti is worth each penny you spend on it. Due to the unruly comparison, people have made an opinion of Spiti being merely a debased version of Leh Ladakh, but this is a misconception, Spiti is beautiful and enchanting in its ways, stating the silver lining Spiti trip is more affordable than Leh Ladakh.

2.How many days does it take for Spiti Trip?

Complete Shimla – Spiti – Manali circuit, it will take 9 to 10 days, if you explore Kalpa and Sangla valley (Kinnaur). You can add or subtract places as per your comfort but a minimum of 7-8 days are needed for the trip.

3. When is Spiti open for tourists?

4.Are any passes required for Spiti?

No Indian tourist does not require any passes for Lauhal Spiti but does carry valid Id proof and documents to prove your nationality (If coming by Rohtang Pass, you will need a permit). Foreign tourists, on the other hand, have been mandated to avail themselves of Inner line permits for places like Morang, Khab, Tabo, Dhankar and so on which are close to Indo-China Border.

5.What is the Height of Spiti?